For nearly 60 years, Millie Zavadil, 89, of Glenwood has been creating kiddie parade units in her hometown.

It all started in 1960 when a daycare provider suggested that Millie enter her 3-year-old daughter, Lynn, in the annual kiddie parade during Glenwood Waterama. That year, Millie transformed Lynn’s doll buggy into a giant rabbit for her to push down the parade route while wearing a handmade white dress and a bonnet with bunny ears. The final touch was the live rabbit that was placed inside the buggy and stayed there for the entire parade. The entry earned a first place ribbon in the doll buggy category that year and a family tradition was born.

In 1960, Millie Zavadil entered her three-year-old daughter, Lynn, in the doll buggy division of the Glenwood Waterama Kiddie Parade... and a family tradition was born. Contributed photo

Every summer the family chooses a category and a theme and starts planning, building and decorating in preparation for the parade, which is always held during the last weekend in July. Depending on the theme, the materials are quite simple: lots of crepe paper and chicken wire.

Millie Zavadil, right, and her daughter, Lynn Staples, posed by a photo from the 1960 Waterama Kiddie Parade (also pictured above). Lynn was participating in her first parade that year. Contributed photo

“It’s such fun,” said Millie, “but it takes a lot of work to create things that can hold up when the wagon is pulled down the street for seven or eight blocks.”

Through the years, they’ve experienced rain, windy conditions and even tears of an impatient child who had just recovered from chicken pox. “We learned that crepe paper can make a real mess if it gets wet,” Millie smiled as she remembered those previous parades.

As time moved on, a new generation was there to participate, and Millie continued her involvement with her grandchildren. Now in recent years, she is working with her great-grandchildren. She joyfully recalled the themes they’ve used in all those parades.

“We’ve done everything from butterflies to nursery rhymes to clowns and even a Minnesota theme with mosquitoes,” Millie said. “I think my favorite theme was the Campbell Soup Kids in 1987. We built a big can of Campbell’s tomato soup and dressed the kids in chef hats and aprons. They were so cute!”

Millie’s ingenuity and sewing skills have come in handy. Although she doesn’t sew much anymore, Millie remembers sewing all her own clothes as a young woman, and she enjoyed sewing for her children and for her grandchildren. “I sewed a dress for my granddaughter when she was a flower girl in a wedding,” said Millie. “And we used that dress again a number of times in different parades.” 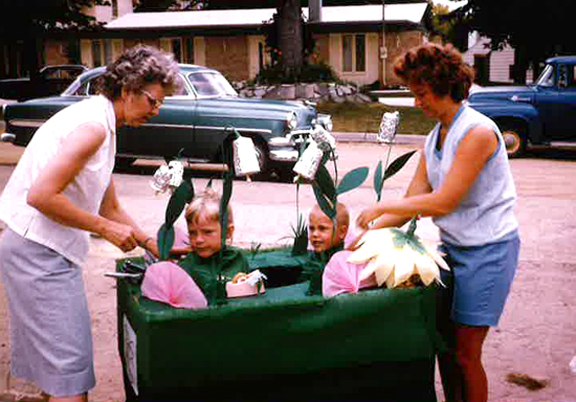 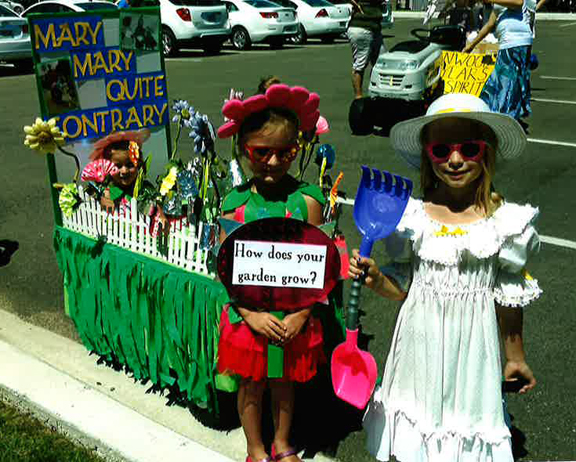 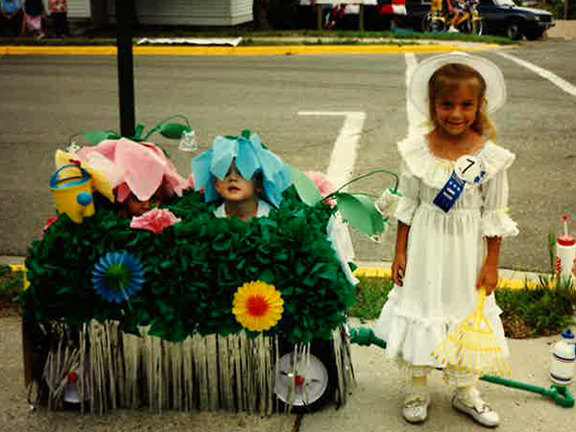 Some entries in the Waterama kiddie parade were so good, they were repeated. One of those popular themes was “Mary Mary Quite Contrary, How Does Your Garden Grow?” Here are the entries from 1964 (lower left), 1989 (below) and 2016 (left). Contributed photos

One parade theme has been used three times with three different generations. Mary, Mary Quite Contrary, is a nursery rhyme that was first used with Millie’s children in 1964, then with her grandchildren in 1989 and finally in 2016 with her great-grandchildren. “Each time we did a little better job since we had learned from previous years,” said Millie.

Last year, they chose a puppet show theme from the movie, Sound of Music. Once the idea was chosen, Millie got to work creating marionette-style puppets that could be manipulated from above using a frame and strings connected to the puppet’s legs and arms. Not too many people would even know how to begin a project such as this but for Millie, it wasn’t a problem. She went to her set of World Book Encyclopedias and looked under the key word ‘puppet.’ There she found everything she needed to create marionettes that the kids could handle during their puppet show on wheels. The family decorated their wagon, painted a mural for a backdrop, and the kids wore costumes appropriate for the theme. Their hard work earned the team a first place ribbon! 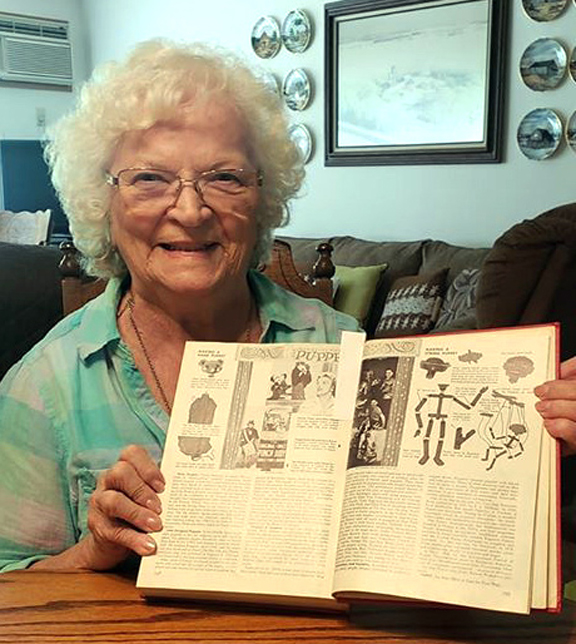 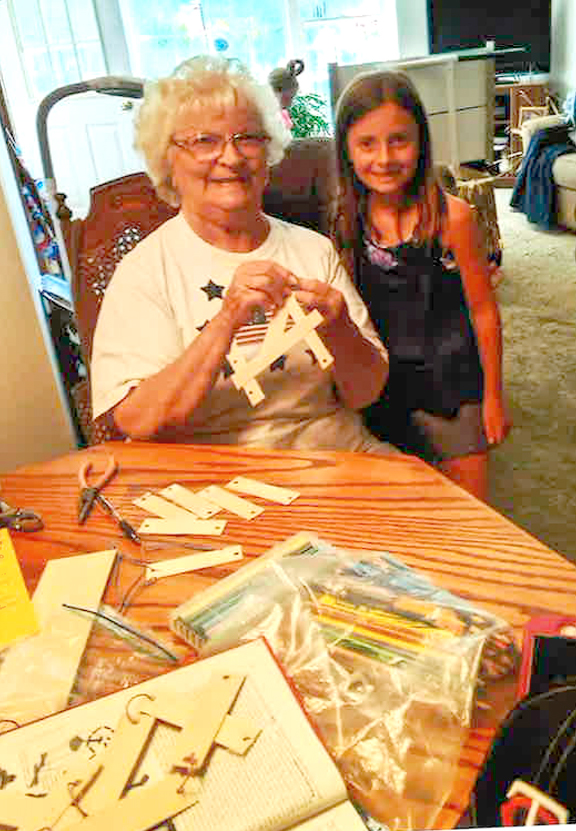 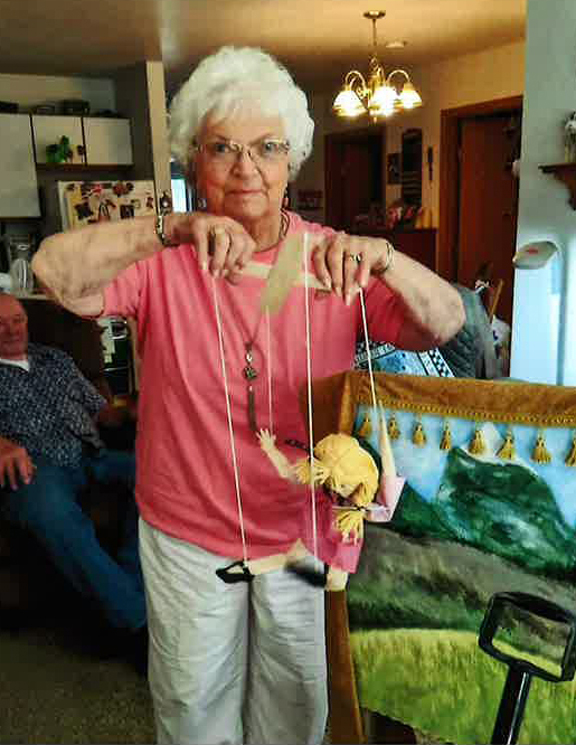 Left: Millie Zavadil always uses her World Book Encyclopedia as her source when building parade floats. She showed where she found the information on marionettes. Middle: Millie and her great-granddaughter, Emma Heidelberger, are pictured working on puppets for the 2019 kiddie parade. Right: Marionettes were part of the 2019 parade float, and thanks to Millie’s creativity, they were fully functional. Top photo by Faith Anderson, others contributed

Millie’s daughter, Lynn Staples of Starbuck, is as dedicated to the kiddie parade tradition as her mom. “My mom has always been a creative person with lots of great ideas and lots of energy, too,” said Lynn. “When mom moved into her townhouse, we didn’t move her set of encyclopedias. But later, when I learned how much she missed them, I purchased another set at a garage sale.”

As Lynn and her mom work together with the children to build a new parade entry each year, they all agree that it’s the memories that make this family tradition important.

Not only does Millie treasure the family time spent working on the kiddie parade, but the entire Waterama celebration has always been special for her. “I really love Waterama,” she said, “and I so look forward to all the events and activities.” Years ago, she helped raise money for the event by selling Waterama buttons for a dollar. “Back then, when you bought a button, you had a chance to win a new car. My friends and I would go to different towns, and we found that people were quite receptive. We sold a lot of buttons!”

The 1987 Campbell Soup Kids entry was one of Millie’s favorite. Contributed photo

This year, when Millie learned that Waterama officials had decided to “put a pause” on all events in 2020 because of the pandemic, she was disappointed. “I was so sad…very sad, to hear that they canceled Waterama,” Millie said. Her eight-year-old great-granddaughter, Emma Heidelberger, had been crowned Junior Princess in 2019 so the family was looking forward to all the events during the 2020 celebration. But, as things turned out, Emma and the other girls who were crowned last year will now continue their reign until the last weekend in July of 2021.

“I look forward to next year and hope and pray it will be better than ever, said Millie. Plus, we have a whole year to come up with a theme for the 2021 kiddie parade, so it should be a great one!”

And the family tradition continues.

A grand history of bandstands

Making a difference,one child at a time